Museum Of The American Arts And Crafts Movement Dazzles In St. Petersburg

After years of waiting, the Museum of the American Arts and Crafts Movement opened in St. Petersburg, Florida on Sept. 7.

Founded by collector Rudy Ciccarello, the museum is the world’s first dedicated to the Arts and Crafts movement, which happened between about 1890 and 1930 and revived and elevated handcraft in the wake of the Industrial Revolution.

More than 800 works collected personally by Ciccarello are showcased, culled in part from the Two Red Roses Foundation, of which he is the president and founder.

Designed by Tampa-based architect Alberto Alfonso in close collaboration with Ciccarello, the five-story, 137,000-square-foot museum is a triumph. While the design is modern, it was built in keeping with the movement’s ideals of high-quality craftsmanship.

A gallery dedicated to prominent architects of the movement includes members of the Prairie School, including Frank Lloyd Wright, George Grant Elmslie and George Washington Maher. Their shared philosophy was to create an American style, with form and materials integrated with nature. Wright’s leaded glass skylights from the Arthur Heurtley House in Illinois are installed at the center of the gallery, where natural light showcases furniture, lighting and glass panels.

Rooms from houses of the era have been relocated to the museum, including the warm, wooden Culbertson House Entry Hall from Pasadena, California, designed by Charles and Henry Greene in 1902. A 1912 floor from Arthur Curtiss James’ Aloha Landing boathouse in Newport, Rhode Island, was conceived by Addison LeBoutillier, chief designer of the Grueby Faience and Tile Company.

Lamps and lanterns shine in the Lighting Gallery, coinciding with the increased use of electricity in the early 20th century, from designers including the Tiffany Studios. Ceramics firms including Rookwood, Grueby, Marblehead and Newcomb produced decorative, customizable tile installations. A gallery dedicated to tile showcases stunning examples. More discoveries include a Furniture Gallery with handcrafted works by Gustav Stickley, Byrdcliffe Colony and Roycroft Shops.

On the top floor, George Nakashima’s Arlyn Table and Conoid dining chairs are displayed. While these pieces were built in the 1980s, Nakashima’s values of expert handcraft and simplicity align with those of the Arts and Crafts movement.

Tickets to the Museum of the American Arts and Crafts Movement are $25, $23 seniors, $20 active military firefighters and police, $10 youth ages 6-17, free for kids 5 and younger. Read the entire article and see the photos here. 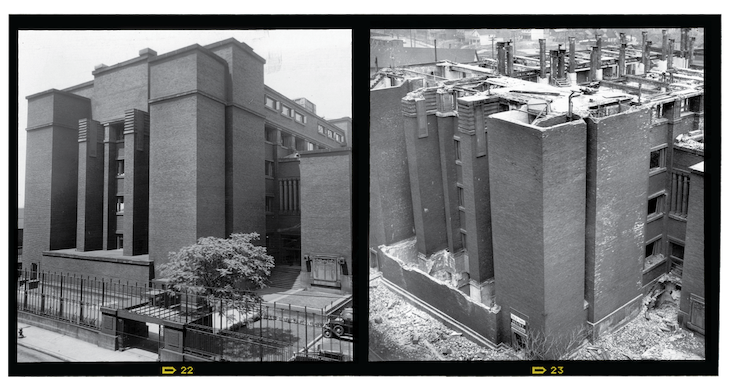 Two visionary masterpieces of American architecture that were razed to erect a parking lot and a truck stop will be memorialized this fall in an exhibition at Chicago’s Wrightwood 659, beginning September 24, 2021.

“Reconstructing the Garrick: Adler & Sullivan’s Lost Masterpiece” investigates the full life span of this long-lost treasure. Opened in 1892, the Garrick Theatre melded technology and creative architectural practice, most evident in the building’s 1,300-seat theater, with its magnificent ornamentation. Chicago-based architect John Vinci curated the presentation, which grew out of a drawing project of his to understand unknown aspects of the building’s interior circulation and construction. These drawings will be presented for the first time, along with archives, salvaged architectural ornaments and fragments, and haunting archival photographs by Richard Nickel. Tim Samuelson, Chris Ware, and Eric Nordstrom co-curated the presentation.

Despite a tumultuous year due to the global health crisis caused by COVID-19 and economic uncertainty across all sectors, many individuals and institutions with large investments in the stock market experienced extraordinary growth in the value of their holdings. Virginia G. Piper Charitable Trust’s endowment grew by $123 million in the 15 months following the start of the pandemic. With these two opposing forces at work, and as stewards of the Trust’s founder, Virginia Galvin Piper, Trustees felt compelled to share with the community all of the earnings in one swift action.

“I am proud to live in a community that has an organization like the Piper Trust that takes swift action to support the work of nonprofits, especially in this time of great need,” said Stuart Graff, President & CEO of the Foundation. “As the leader of the Frank Lloyd Wright Foundation, I am humbled and grateful that they have put their trust in us to use these funds to make a positive impact in our community. We are committed to using our share of the Now is the Moment Grants Commemoration to inspire visitors to Taliesin West with ways to live a better and more beautiful life, deeply connected with nature, beauty, and our community.”

To learn more about the Piper Trust click here.

The Tour Day partnership between The Alden B. Dow Home and Studio and Docomomo US is an easy one to understand. But first, Docomomo — What an odd word, right? It stands for the DOcumentation and COnservation of buildings, sites and neighborhoods of the MOdern MOvement. DO CO MO MO.

Docomomo US is an organization dedicated to the preservation of modern architecture, landscape and design. Likewise, one of the missions of the Alden B. Dow Home and Studio is to support and present educational programs that promote the importance of modern design and its preservation.

One of the many educational programs Docomomo promotes is Tour Day on Saturday, Oct. 9. It is an annual celebration devoted to the appreciation of modern architecture across the United States. Tours and events focused on architecture and design of the Modern Movement are hosted by Docomomo US chapters, partners, and leading voices in preservation.

The Alden B. Dow Home and Studio has long been a destination for admirers of Mid 20th Century architecture and design. Mid-Century Modern (MCM) architectural design came to Midland, Michigan through its native son, Alden B. Dow, FAIA. With his iconic 1934 Home and Studio, he established a design legacy that was followed by architects attracted to the area by his innovative, functional and dynamic work.

In a non-pandemic year, almost 20,000 visitors from around the country make the trek to Midland to tour the iconic structure. Also, in a non-pandemic year, Autumn Reflections, an annual event celebrating Dow’s local architecture would be scheduled for the first weekend in October. These two factors and some innovating tinkering with the format to keep visitors and docents safer in these COVID-times, made the theme and partnering with Docomomo for Tour Day 2021 a perfect fit.

in addition to the Expanded Tours of the Home and Studio, with limited registration, three new walking tours are being offered so people interested in design can experience a part of the Midland’s MCM heritage and stay safe at the same time. For information about the tours and other offering click here.

Growing And Living: John Lautner And The Legacy Of Organic Architecture

In the coming issue of the Frank Lloyd Wright Quarterly magazine, the focus is on the work of an architect, but his name isn’t Wright. FLWF partnered with the John Lautner Foundation to develop an issue dedicated to Wright apprentice and brilliant architect, John Lautner.

You may ask why the Frank Lloyd Wright Quarterly is publishing a magazine on another architect? In a word: Legacy. Frank Lloyd Wright’s influence on architecture, design, and living is carried on by those who have been inspired by his principles of organic architecture. The apprentices who studied under him in the Taliesin Fellowship, along with countless architects of the past, present, and future, carry on the legacy through their own vision and voices. Click here for an excerpt from the issue for an exploration of that legacy through the work of John Lautner.

Mark Hertzberg provides us with a glimpse into two ceremonies at Taliesin on September 15, 2021 — one to cut a ribbon for the restored Tea Circle, the other to unveil two plaques marking Taliesin’s place in architectural history. One plaque notes Taliesin’s designation as a National Historic Landmark in 1976, the other notes it as one of eight Wright sites collectively named UNESCO World Heritage Sites in 2019. The latter marked years of effort by many people with the Frank Lloyd Wright Foundation and the Frank Lloyd Wright Building Conservancy in particular. Wisconsin Gov. Tony Evers and Anne Sayers, Wisconsin’s Secretary of Tourism headlined the event. Read all about the ceremonies and see the photos here.

This weekly Wright Society update is brought to you by Eric O'Malley with Bryan and Lisa Kelly. If you enjoy these free, curated updates—please forward our sign-up page and/or share on Social Media.

If you’d like to submit content to be featured here, please reach out by emailing us at mail[at]wrightsociety.com.

No spam, ever. We'll never share your email address and you can opt out at any time.